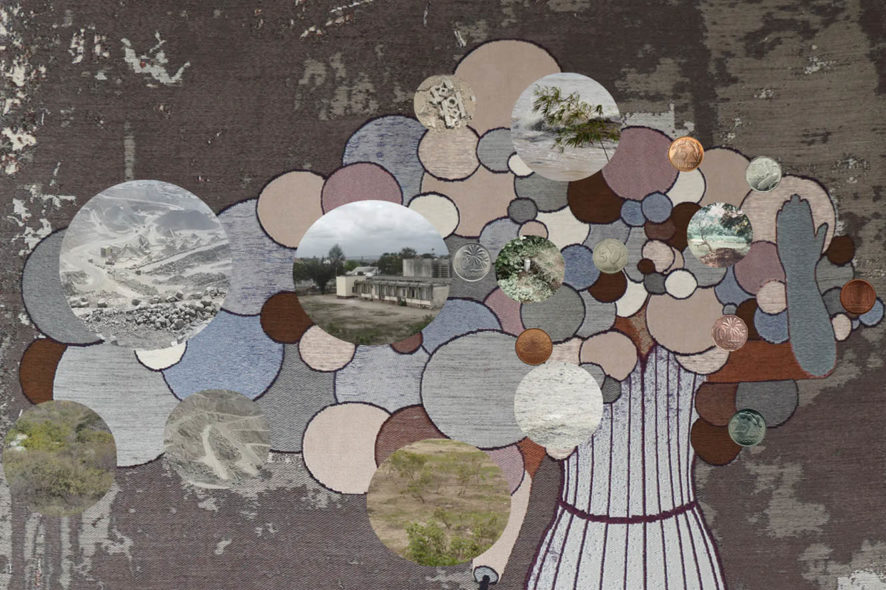 Supposed to open November 13, 2020, Uncertain Where the Next Wind Blows, solo exhibition by Otobong Nkanga stands until January 31, 2021. Due to covid-19, the public opening date is yet to be announced.

With one wall drawing/reinterpretation made by Lotte Konow Lund.

Recipient of the Lise Wilhelmsen Art Award Programme at Henie Onstad Kunstsenter, one of Europe’s largest long-term schemes, Otobong Nkanga (b. 1974, Kano, Nigeria) is the first of sixteen artists who will be awarded in the following 32 years. Beyond the award, the program consists of funds to produce an exhibition at Høvikodden, an exhibition catalog, and the acquisition of art for the Henie Onstad Collection, in this case “Revelations” (2020), as a way of keeping the memory of the award and building up a body of works for the public.

Writing this article and weaving thoughts in the shape of a dialogue, is María, a filmmaker, making sails according to the directions of the wind, and Montserrat, who has been working with the body as an antenna. Both studying in the Academy of Fine Arts in Oslo.

Bodies, breath, bling, land, memory, memory, memory. Of a body, of a history, of a composition, a dance that calls beyond our finite time. Otobong Nkanga’s artistic practice is shaped between drawing, installation, textile work, photography, sculpture and performance. Her delicate use of poetic language frames complex layers of themes surrounding and consolidating the work. The themes that are touched upon are complexities of human influence and presence in nature as well as in the global economy. Her point of view is colored by her own history. From the microscope to the telescope and the other way around, she traces the vestiges of trade in raw materials and how goods and people circulate the world in different ways and on different premises. Nkanga’s narratives are about how the extraction that supports continuous circulation leave irreversible traces, marks and scars on the landscape, and how the world is incredibly dependent on and used to the circulation of goods.

// The senses & the elements. The bling & the scars. The bodies & the desires.

“Nkanga’s work reminds us that we ingest the elements of the world with all of our senses, materially and molecularly, binding us to the living and non-living topography of the planet.”[1]

Undoubtedly, the sensory realm is present throughout the entire exhibition. It’s seductive, very sensuous, but also at times repelling. In “Anamnesis” we were presented a white wall in the middle of the room with a crack expelling smell. A scar or a river composed of some of the most common commodities traded to Norway, a path of extraction that builds on itself, carving its own depth. The scar sometimes smells rotten and sometimes like cloves and chocolate, a variety of spices, and coffee, mixed with the smell of glue to fix the resources for our commodities in its position. The glue swallows the smell, the traded resources transported to Norway are fixed. Is the smell fading?  We are trying to reach the smell. The scar is hinting to the land, to the dependence on what for most of us seems invisible – movement and extraction – in the very familiar goods such as tea, coffee, etc.

The scar is in the middle of the room. It is reminding us of the actual white box belonging to an institutional and well-known museum, we see a white wall with a crack to smell.

M: There is the feeling that Nkanga is illustrating a system as a river eroding deeper and deeper, dependent on our habits of desire and consumption. I could have smelled the anger of our own extraction, but the smells are swallowed by glue. The artist fixed the resources in glue, seeming like an everlasting scar, installed in the exhibition room. 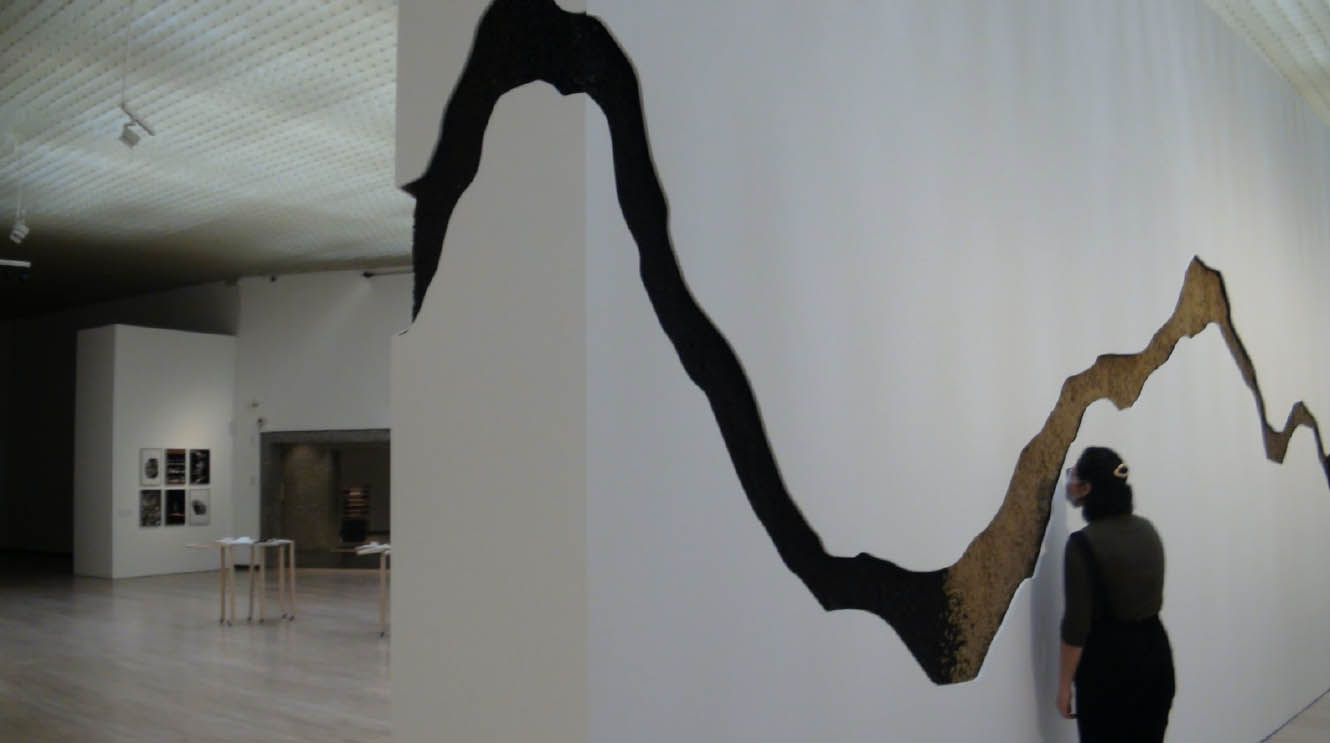 Following the senses, there is a leap to the visual, and a return to the smell once again. The bling. The seduction of the visual strikes us almost instantaneously, glimmering threads traveling throughout the walls woven in intricate tapestry designs. Intricate histories and memories and time scales are woven too.

MM: Like a crow dazzled by silver, on a quest for shiny materials.

The Bling also refers to the massive rifts in the land that hold the memory of the desire of owning. Bling appears and reappears throughout the tapestries and surfaces in the exhibition, the cleanliness of the room and the beauty of the tapestries offer a strange sense of discomfort, yet they are beautiful and dazzling. The recurrent theme of the scarification of the landscape is maybe prompting this bodily response, which contrasts with the beauty. A pain. A troublesome feeling hits. 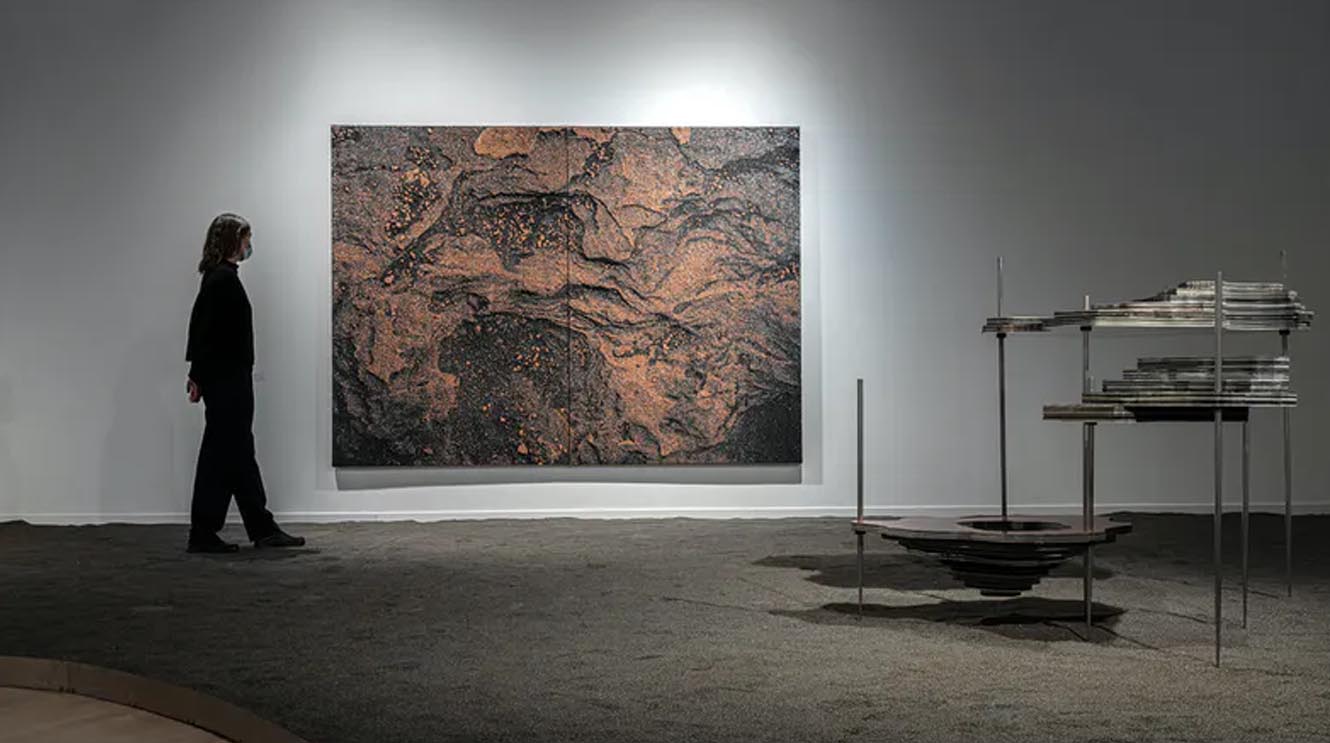 Our common land, and the hands that grab it, mark us with impression. The sensuousness and intensity of materials stand central, stepping on a glimmering floor, stepping on mica, “kråkesølv”. Sound arises and hints to finding scars recurrent in the land, recurrent in every context. How do they arise in the Norwegian landscape? Hints.

M: There is a history of an ecosystem at Langøya, not too far away from here, where the topic “unbalanced circulation” is a big deal. Since they have been extracting limestone, there is nothing left of this resource, like a crater. This cavity is filled today. The attempt is to restore the biodiversity from before the extraction. They are technically working with the soil and measuring the scar’s possible leakage below ground to the surrounding sea, filling and protecting possible cracks. 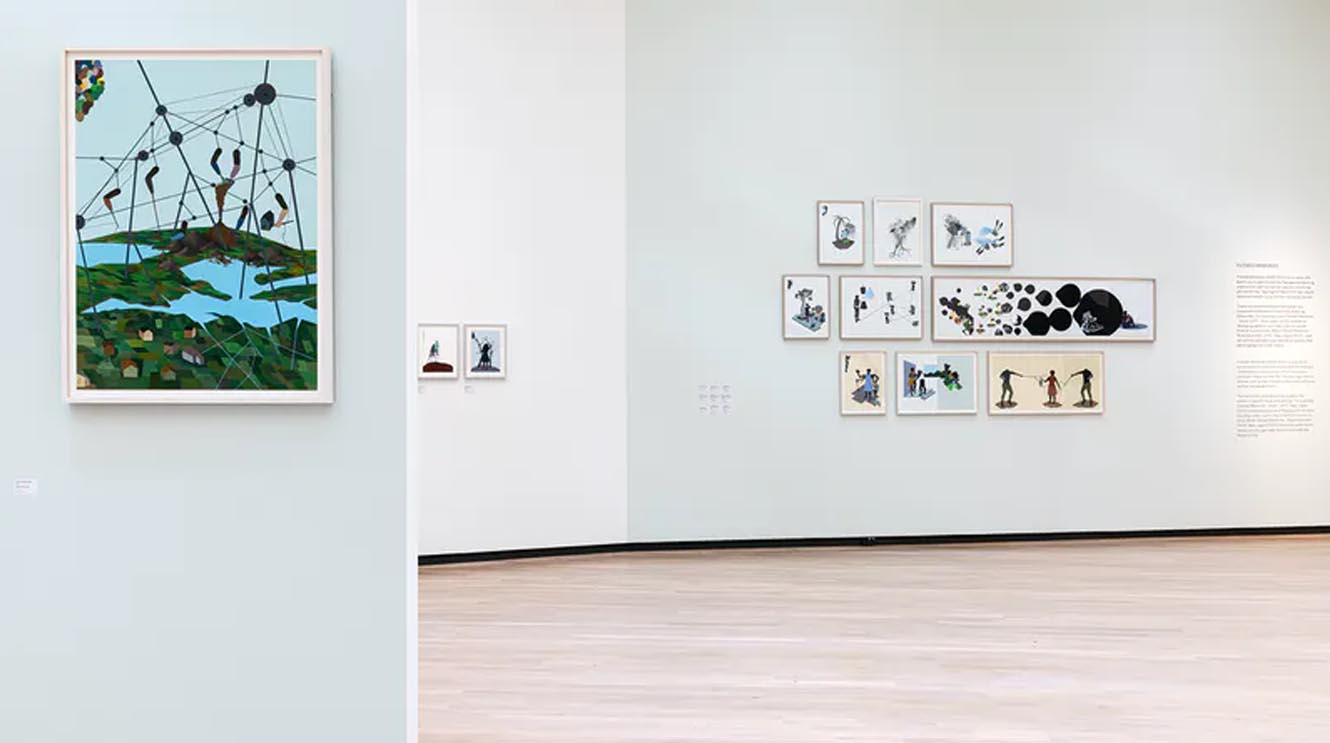 Individual arms, legs, bodies without faces form an ensembled machinery. Action and its gestures put individual features, characteristics or belonging in the shade. Where the body appears as a whole, showing a face, it seems as though it has become territory, grabbable and coveted by headless mechanics, prone to the violent treatment of which the ground is subject.

M: Extraction is linked through time and space. Her topographies could be psychological and geological. And if we were to buy a piece of soap wrapped in a poem by Nkanga, about how it is to be a piece of soap, what would we clean? Our consciousness, or our memory? Would a part of us become memory bubbles and melt together with Nkanga’s? 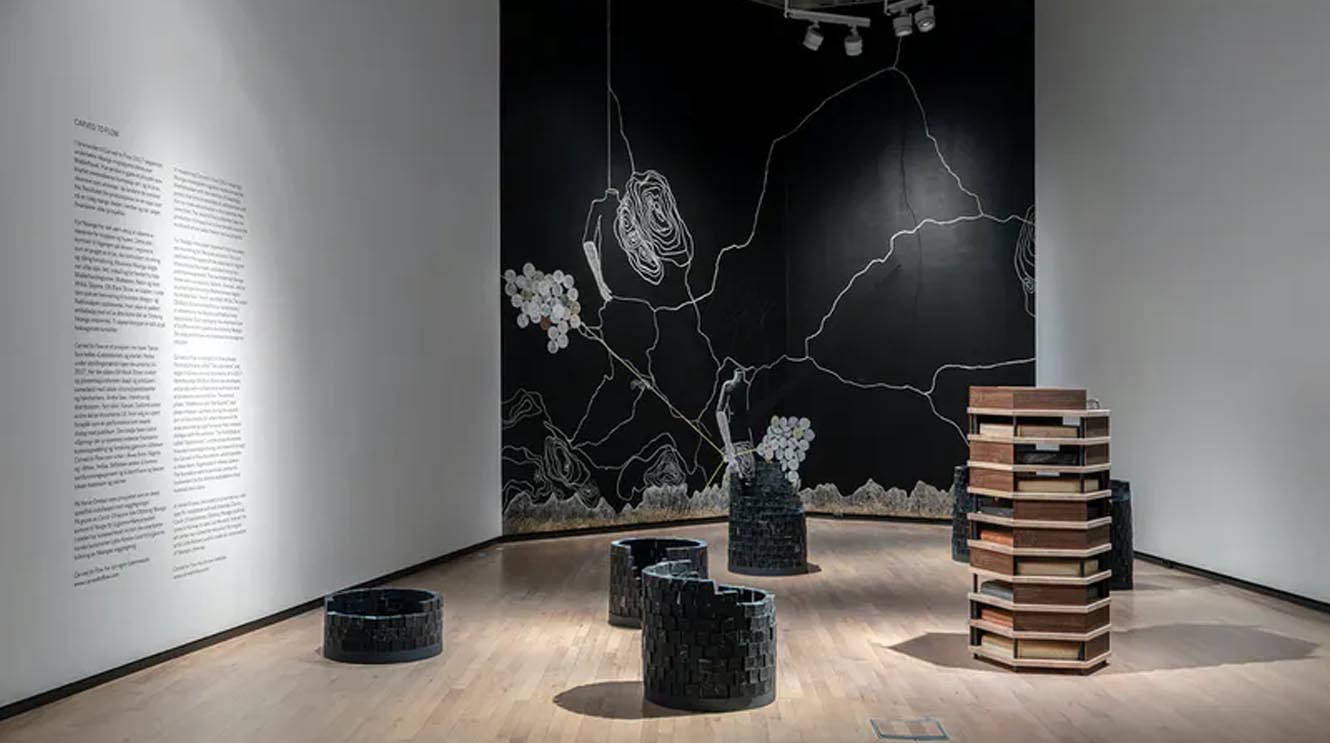 We really missed or could even say craved Otobong Nkanga’s presence in the room physically and wonder how the arrangement of the exhibition would have looked like if she had been physically involved, if she had walked the land, the area itself. The hanging tapestries could be laying parallel with the ground. Maybe Uncertain Where the Next Wind Blows would be very similar, maybe details would have changed. We cannot but ask ourselves this, as the current times poses important and interesting questions when site-specificity or performativity matters arise, among others. Presence is hardly substituted by the digital.

A mouth opens up and swallows a shiny stone. The video is finished.

M: Shifting the states is possible if you are a magician, or tricking the trading, or trading the tricks, if she could move us?
MM: I find sharp outlines vanished, a separational way of thinking of what the body is and what the earth is, ingestions and compositions. It is not clear; they fit one another and change one another.

In what seems to be a fair way to end a flowing conversation, we’ll allow the last words to be those in the staining fibres of In a Place Yet Unknown (2017):

In a place between stillness
fear and a slow meltdown
a new form grows
Visible only to the heart
palpitating to the unknown
flaking, aching, so many craving

[1] Campbell Betancourt Diana, Bodies, Breath and Bling in Concert with the World, p.6, 2020 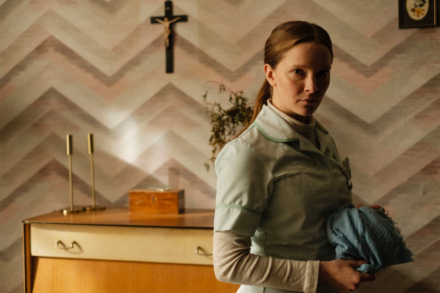 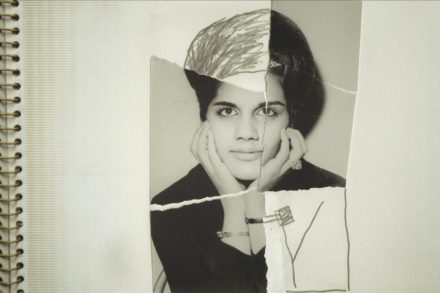 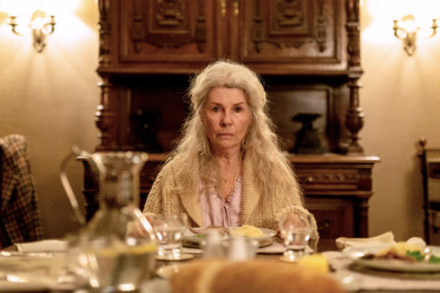